In 2007, THE DAY I HIT A HOME RUN AT GREAT AMERICAN BALL PARK was published and the author is currently touring the United States and abroad promoting health and family literacy and teaching students how to become more effective readers.

One of the best ways to get a student actively engaged in reading is to create a local baseball book for kids that a student can relate to. Kids remember the first time they stepped into a local MLB or minor league ballpark and saw their favorite player playing on real turf the game they love. This is why I have created local baseball books for local sports fans.

Dr. Paul Mullen encourages students to strive for their dreams

Children’s author pays a visit to students at Waverly schools 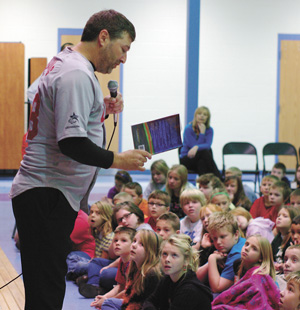 What do reading, baseball and the great American dream have in common?

Students at Waverly City Schools had the opportunity to find out Tuesday when they were visited by children’s author, Dr. Paul Mullen, who encourages each and every child to reach for their dreams. Mullen had sent out a mass e-mail to schools in Ohio offering to speak and Waverly Intermediate teacher Becky Greenhaw responded to him, securing the visit.
As a youngster, Mullen grew up hearing about Cincinnati Reds greats and loved baseball at an early age.

“When I was a young child, back in 1969, I had the dream of hitting a home run with the Cincinnati Reds,” said Mullen. “My Cardinals — the little league team I was on — was one game away from going to Crosley Field, which was the field the Cincinnati Reds played on then. At my age, I took that dream and created a book about it.”

The book has received the attention of other ball clubs, such as the Chicago Cubs and the New York Yankees, which have requested for Mullen to create a book about their ball parks.

“Maybe each student doesn’t get a chance to be a Cincinnati Reds ball player, but they all know what the stadiums are like,” said Mullen. “I always felt that I’ll keep Fuji as the central character because that’s who I was. I was Fuji, the young boy who had the dream.”

Mullen gave up his day job as an executive manager four years ago so he could travel to schools around the country and talk to kids about striving for their dreams.

“I go around the country and have been over 60,000 miles in the United States speaking to students about the importance of believing in a dream. The reason I am here today is because I want you to take that dream you have and live it out,” said Mullen to the students at Waverly Intermediate during the Tuesday morning presentation.

“Why is that so important today? Because we know that today we are going through a financial crisis across the country, but you know what, that doesn’t mean that dreams don’t exist and that dreams don’t happen. They do.”

Mullen told the Waverly students about his own daughter, Erin, who wanted to play baseball despite not being accepted by the boys during her little league days.

Erin went on to become the first young lady to qualify for the Little League World Series All-Star game and pitched in a game. At 12 years old, she was throwing a baseball at 70 miles per hour. She switched to softball her sophomore year in high school and helped her team in Blue Ash win its first Division I state softball title. She received a scholarship to Belmont University for softball. During her sophomore year of college, Team USA formed a women’s baseball team and Erin made the team. She pitched a perfect game in Japan in front of 30,000 people and followed that up with a shutout in the next game. Now Erin and Team USA are in the Cooperstown and Canadian Baseball Hall of Fame.

“I hit Erin 150 fly balls every night. After that many fly balls, her arm got really strong,” said Mullen of Erin’s little league days. “When the boys went on to football and soccer, Erin and I worked on baseball. I used to hear her every morning hitting off the tee into the netting. Just because you have a dream, it doesn’t mean it is going to happen right away.

“How do dreams come true? You have to believe. You have to have your family believe in you. And you have to commit. It comes from you.”

“You guys are entering a phase of your life where you get your inner voice. It tells you when you get in trouble, you shouldn’t have done this. That’s what happens when you read,” Mullen told the students. “You are at an age where the more you read, the stronger that voice is going to be. You are going to know you can do it because you will have strong voice.

“That’s why reading baseball books – whether you are a sports fan or not – can help guide you. Fuji was an average ball player. Over a year’s time, he learned how to become a better ball player and a better character. That’s why I love writing sports books. I’m trying to get you, the reader, ready for the next stage in your life to become a stronger character, performer and winner. Winner doesn’t mean winning all of the time in the games. It means having a good attitude, good mind and good spirit. Always enjoy reading because it gives back to you with excitement.” 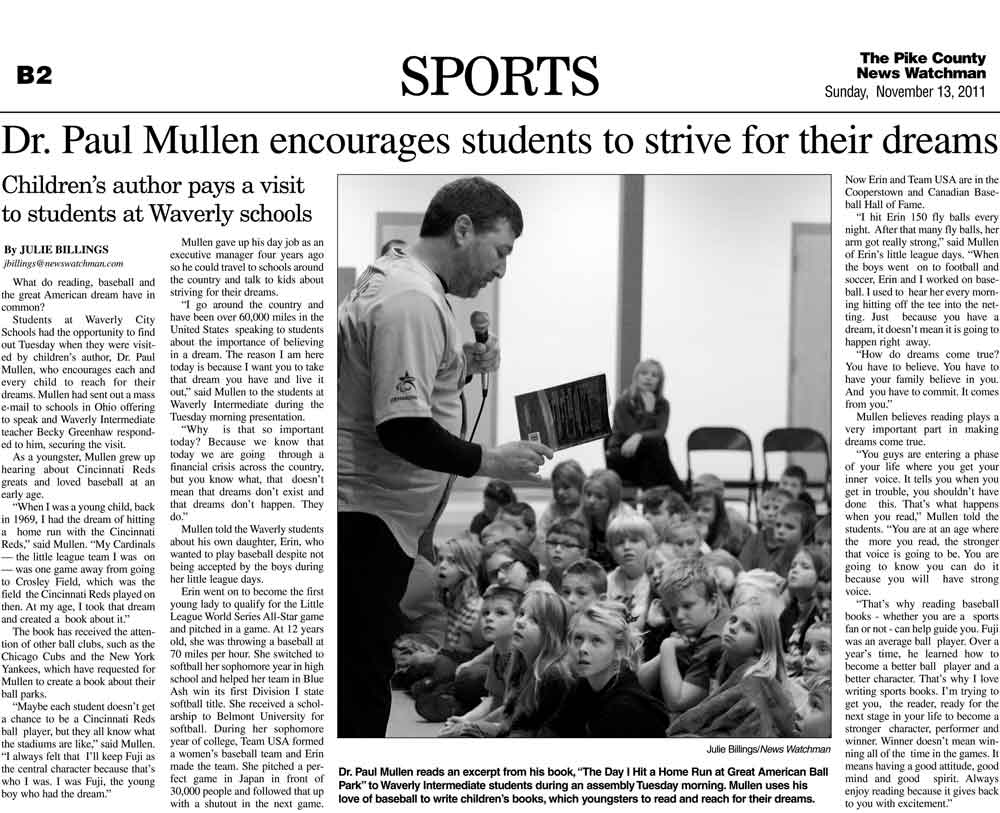